Beryllium used to be called Glucinium

Although it is commonly used in most industries today, beryllium was barely used when first discovered. Nichols Louis Vauquelin discovered the metal in early February of 1798. The discovery was made when examining two types of gemstones: beryl and emerald. Both types of gems are forms of beryllium aluminum silicate. At first, Vauquelin called the element Glucinium, but most others preferred the name beryllium. This is why we call it beryllium. 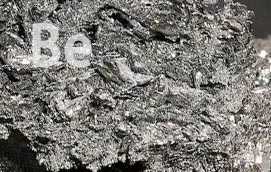 The element was discovered in the 1700s, but it was not until 1828 that beryllium metal became isolated. Friedrich Wöhler extracted the metal from beryllium chloride (using potassium as a reacting agent). Since this time its discovery in the late 1700s, beryllium continues to change and grow. As a result of individuals refining the element and metal, beryllium seems to have almost endless possibilities.

The silver/white metal has low density and is relatively soft. Beryllium is mixed with alloys (Copper, Nickle, etc.), in order to make final products like springs, electrodes, and electrical contacts. Beryllium copper wire, also known as plated wire, is used throughout the electronics industry.

The metal and its alloys are used when building high-speed aircraft, as well as weapons and space shuttles.

Even the medical industry uses beryllium. This is because it is transparent and so the material is used for X-ray lithography.

Beryllium has come a long since it was initially called Glucinium. Beryllium copper is combined with copper to form an alloy, there is widely used in the modern world.